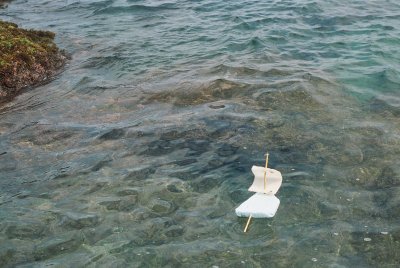 News pictures showed a solar eclipse in process. The band of eclipse appeared to be Africa, Europe. It was the moon moving between the sun and the earth. I saw nothing around midday, before I knew about it and when it was pictured as occurring, I may have been inside the Chinese superstore, looking for novelty gifts for the French single-hander who has a birthday today.

Or, I may have been right down the end of Palamos bay where there are rocks and cliffs and today I made a toy sailing boat from polystyrene foam, bamboo sticks and plastic bag sail. I set off for a half hour adventure with my gallant ship. Some young people appeared on the beach next to where my bike was locked and one looked as if he was concentratedly fiddling with the combination lock. I left my sailing to return to the bike, but the guy was cutting up some hashish on a bench near my bike.

I wondered later if they had gone there to view the eclipse with a few spliffs. 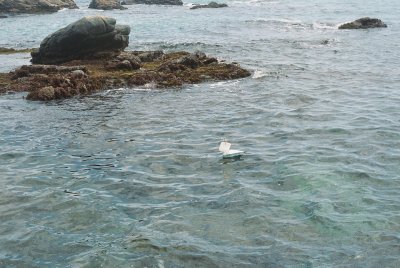