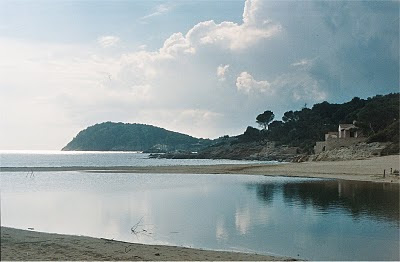 Loba (a small black cairn terrier) and I, went on a longish coastal cycle ride. In a uniquely unspoilt part of Catalunya. 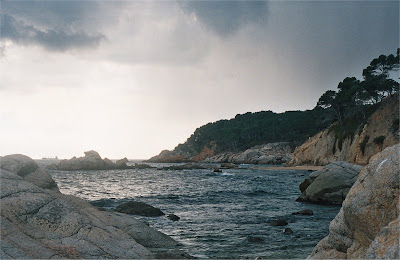 There were sandy, rocky coves with fisherman's shelters, small single room houses bigger than a shed but smaller than a cottage, with a round tiled roof and a chimney. Usually they are purchased and converted to summer houses by rich people from Barcelona or Madrid. At one tiny and very quiet, natural beach, a single fishermans hut remains, the dozen or so others having crumbled into the sea decades ago. It was free for passers by to use. 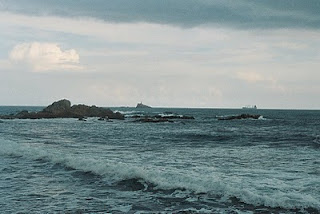 The front opened onto a crescent of sand leading to protective rocks. Inside, on the left, a fireplace which was still smouldering deep under the ashes. A pile of wood had been left by previous visitors as a gift. The fire ignited easily after I pushed some sticks and pine cones in. The back wall had a ledge filled with wine and spirit bottles, a bag of flour, a bag of sugar, a jar of barbeque sauce, a pair of reading glasses and notes of wonder and thanks left by temporary dwellers. On the left was a stone table with old newspapers. Underneath a stack of barbeque racks and a large tree trunk, burned at one end and dragon faced at the other. On the right was a large steel table surrounded by picnic chairs and long benches. The walls had been painted with flowers, fruits and graffitti. The atmosphere was sooty and tatty but there was no aroma of urine, only a luscious scent of the wood fire and the careworn presence of human utensils. Long sticks leant in one corner. I often find good walking sticks leant against a tree or rock and now I leave them too in such places.
I had with me a picnic, sponge buns, which I toasted, a can of olives stuffed with anchovies, bananas, orange juice and a bar of chocolate. 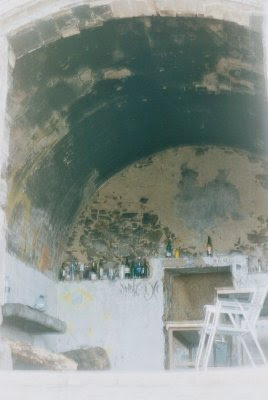 At first I thought I would like to live in a beach hut with a fire, but after a while I noticed I kept getting up to scan up and down the beach outside, to see if people were approaching and so I realised I wouldn't be happier in a hut - although I 'd like to try it. maybe an old stone cottage or a log cabin in the woods, but then would I really wish to live through the Winter in an old cottage with no central heating? Probably not.

I left three pieces of smooth, green glass; a fragrant eucalyptus seed cup; and a lavender flower, on the ledge and collected drift wood off the beach outside to replace what I'd used.

The bike ride was ten kilometres through woods and fields, along lovely sand beaches. I walked the bike over rocks and Loba barked dragged pebbles out of splashy rock pools.


I cannot say where this precious, beautiful place is because it is a treasure and a secret.
Newer Post Older Post Home