Leaping willingly into a data mine?

Google have a data mining strategy to enhance their mapping with user generated location data. A division of Google, called Niantic Labs, previously developed the app, Field Trip. This was a geo cache activity app. The current project is Ingress. Similarly location based but with a competitive aim, users choose one of two factions, Enlightenment or Resistance and they compete to capture portals for their own side and then maintain the portal by feeding it with XM - Exotic Matter - which consists of credits gained through the game. The story is of beings from another dimension, called Shapers, which are attempting to shape the human race, with the spurious benefit of technological and intellectual advancement and that Shapers have shaped humanity for ever anyhow, so we may as well embrace them and accept their Enlightenment. The Resistance is skeptical and believes the correct path is to prevent the loss of good old down to earth humanity.
The Ingress app is free on Google Play Store but once installed it will not activate. Instead the frustrated user is fed with rumours and incremental updates full of the promise of imminent arrival of your activation code invite. Ingress is in beta and Google wish to shape the battlefield to their advantage, so until the app and user base is primed for mass take-up the rumours and conspiracy theories continue.
What a hopeful user can do while waiting for activation is to submit potential portal locations. This is done by photographing suitable portals, landmarks, interesting buildings, public libraries, tourist spots, businesses etc. With geo tagging switched on the picture is taken and then sent to NIA Super Ops, which will appear in an Android phone after the Ingress app is installed. I am currently enjoying this part of the game because it involves no conflict, simply walking to my favourite places and photographing the locations I think would make good portals for Ingress.
The data mining aspect is interesting in that portals tend to be the most common Google Maps points of interest, such as Nelson's Column, The Taj Mahal etc. What the data mining exercise misses is the grass roots, the truly local and intimate data. When Google maps is used there are photographs at locations frequented by the public, everyone takes more or less the same photo of a landmark and some upload their handiwork to Google maps. One problem I foresee is Ingress will be populated globally by enthusiastic players happily providing data via gameplay, but if portals are the lowest common denominator they will miss out on the truly deep data of local knowledge.
There is a big difference in going to a tourist office to find the places to visit in a new location, compared to visiting friends who have their favourite spots, such as where they walk their dog daily or where they go to do some undisturbed qigong practice. These grass roots locations are not beauty spots in the general sense, in the language of tourist offices or even of Google Maps, they are little visited gems. Instead of a public monument, or a tourist visitor centre at a landmark, these intimate locations are created by daily use. They may be a tight path by a hedgerow, a cut between housing estates, where blackberries grow. My favourite spots are those I go with my dog, the corner of a maize field where I saw a big red dog fox once and the gateway where I fed a herd of cows with maize heads. Other gems are a slipway into the River Deben with a ramshackle boat shed and a long crank wooden mast set into the muddy foreshore.
So, unless Ingress enables players to establish truly local 'portals', then Google will miss out on the net gains from their gross tonnage of data mined from Ingress users.
I have yet to receive my activation code, known as an Ingress Invite, but I know it will turn up soon. As far as I can see there are no other players in East Anglia and so I may not have a game to play even when I am invited. If I could establish a host of rural 'portals' and maintain them in my chosen side, Resistance, then that presence would attract the opposition to come and spend a day in Suffolk and capture the portals for their own side. In the process they would get to visit some of the most subtle and gently rewarding experiences available in the location. 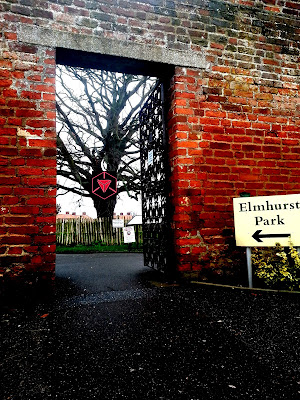 I'm sure my favourite tree in Woodbridge, an old copper beech, will not be accepted as an Ingress portal, but I would like these intimate and modest places to become part of the Ingress universe.
Otherwise all Google will gain from the data mining exercise that is Ingress, will be a reinforcement of the popular tourist spots within their mapping database.
I am not concerned about having my favourite local spots overwhelmed by geeks playing imaginary battles on their Android phones, because once grass roots Ingress portals are enabled globally there will be so many they will all be hidden in the crowd.
This is a photograph I submitted to NIA Super Ops with an added Ingress logo, as my attempt to gain an early invitation to play, while the game is still in beta.
Something inside me says already I will be quite bored by Ingress once it becomes open to the public and each portal is a hive of opposing XM Exotic Matters - geeks with Android smartphones standing around fighting their imaginary battles with their touchscreens. Perhaps then I shall be grateful that my secret places have not been taken up?
Newer Post Older Post Home