Loba is Spanish for she wolf. Loba was a rescue dog from Las Palmas de Gran Canaria. We sailed together from the Canary Islands to Madeira, to Gibraltar, up the Spanish Mediterranean coast to France. This photo was taken in Sete, southern France, as the mast was being taken down to travel north up the French inland waterways to the UK. 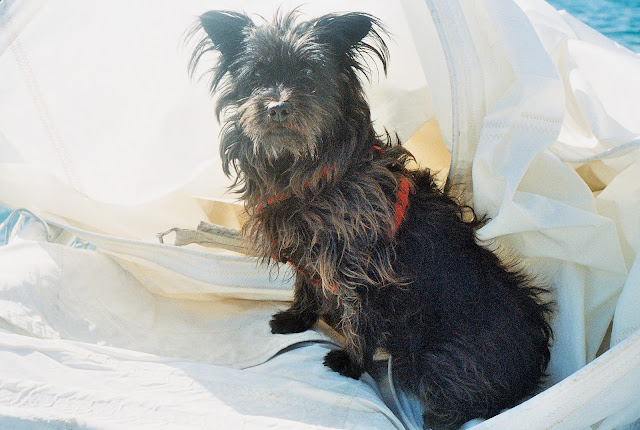 Loba did not mind ocean voyaging but did not love it. This is why I chose the route home through France, rather than the north Atlantic route to Britain. In the French inland waterways we stopped each day in the bucolic wonder of the canals and rivers and walked into villages and towns to enjoy terra firma. Loba adored France. We now live in a houseboat in Suffolk, UK and I promised Loba there will not be any more ocean voyaging. But she does not know I intend to buy a motorcycle and take her in a special rucksack everywhere I ride. A dog becomes such a precious part of your life and I have been Loba's owner for seven years now. The cairn terrier is my favourite breed and I was so lucky to have found Loba the cairn. Just thought I'd blog this aspect of my world.
Newer Post Older Post Home