Undergrowth hid a portal visible on my phone. I was in the virtual reality of Google's Ingress game. Trees surrounded my visual field, Loba padded around in dead leaves carpeting the ground, my bicycle leaned against a tree nearby.
For ten minutes I stared intensely into my phone screen, maximising my gains and minimising my losses at the portal. I was happy that no other players had managed to access this portal because it had been located out of place, after I submitted it to Google but found it had erroneous gps geo location. But I knew the land owners and took advantage of my unique access knowledge to the thickly wooded and marshy piece of land.
I wondered about those people who use these quiet spots to meditate, the pure nature thinkers, skilled at clearing their thoughts and eyes, intent on perceiving 'reality'. As I stared into my phone screen my state of mind was almost completely uninvolved with my surroundings. Occasional glances around were met with the tangled colours of undergrowth and leaf mold and my senses were aware that other Ingress agents may have followed me to find out the way in.
These glances were instinctual, unfiltered reactions to gusts of wind in the leaves. Far from trying to silence the noise of technology, of smartphones and the Internet I was in a blur of interaction with those technologies to an extent they excluded the 'reality' around me. I was 99% concerned with the virtual reality of a computer visual overlayed on Google Maps.
I came to the conclusion that my feeling of not being 'there' in a natural sense was actually a way of being there very close to the way other animals experience it.
Wild animals are not like Buddhists, meditators or yogic nature lovers, in an imaginary enlightened state of clarity with nature. Wild animals are absorbed in hunting, foraging, hiding and moving into potentially risky new areas to gain resources. They are not at all concerned with clearing thoughts, or seeing deeper into life. My virtual reality state of mind gave me insight into what it is to be a hunter, the hunted and the animal at this spot, at this time, with all that involves. 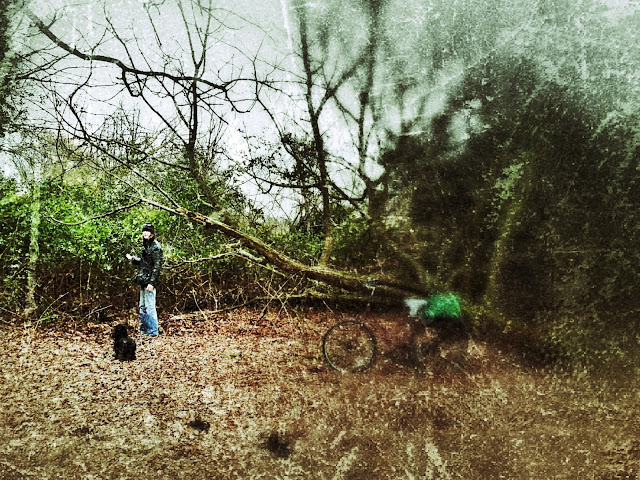 While Ingress is just a game on your phone, playing requires you to move physically to portal locations. Portals are distributed all around the earth and there are already Ingress players of all nationalities. Ingress is still in invite only beta, current players are testing and providing feedback before it is released publicly. Even under this exclusivity, Woodbridge, a small town  in the big game, has around four players and often players from surrounding towns visit to gain points by destroying and capturing 'my' relatively low level rural portals. Big cities have many portals and dozens of higher level players.
I love the daily use of maps and a compass on my phone, the detours and forays into other parts of town to find these virtual portals writhing in slow light and exotic matter. I love the way Ingress gets me away from my regular paths, takes me on walks and cycle rides and the five minute periods waiting for portals to 'cool down' after intense hacking. These waiting periods are inherent to game play, they force me to stand and wait. The only option is to look at the buildings, the trees, the statue, the sculpture, whatever unique features of human creativity a portal is placed at . I notice interesting brickwork, decorative window ledges, wrought ironwork, curving stone steps, blanked off doorways. I learn about my locale in ways I would not without these necessary pauses in the game.
The Ingress map shows nearby portals with distance in metres and their geographical relationship to the one I'm standing at. I get a real feeling for the layout of the area with portals acting as focal points on an action map. Ingress is just computer generated graphics on a phone - the lowest form of 'reality' for technophobes. But they miss the point with their distrust of virtual reality, which, when grounded in geographical locations, cultural artifacts such as sculptures and murals, and architectural sweet spots, is far from imaginary, or even a game at all. Google's Ingress is a world wide catalyst to walk, cycle or drive around in reality. In my experience Ingress does not blind you to the world by replacing it with a computer simulation, it makes the world into an adventure of exploration and discovery of what is  'out there'.